A downloadable tool for Windows

If you use Paint .NET for creating sprite animations, then this plugin is for you. It allows you to view any sequence of frames as an animation within an image without having to leave Paint .NET. You can also save all frames of an animation as a single multi-frame strip, individual PNG files, or as an animated GIF(experimental). Help is also integrated into the plugin. Just hover over the parameter in question and a pop-up will appear.

Try out our Color Pick tool for Windows which is programmable and can capture any color(s) from your desktop.

i love this plugin!! i use it all the time, it's so much more intuitive to me than some regular animation programs (do i look like i know what a "shape tween" is, i just want a video of a hot dog)

a couple small things i've noticed, the "use black as transparency" button is more like use the darkest color per frame as transparency, so if you only want a few frames to be transparent, like a door opening or a full-screen explosion, you end up with a very broken gif :\ "use exactly #000000 as transparency" fixes this and it sounds easier to implement, too, and it would open up the option for the user to choose which hex becomes transparent

also the frame size seemingly arbitrarily maxes out at 1000 pixels per side (and border at only 100...), which isn't an issue in most smaller use cases but i've run into that wall a few times, so it seems better to just say "frames larger than 1000x1000 have the risk of lagging or crashing" somewhere if that's the problem there?

thanks for making this, the option to make the gif not loop is the BEST and this plugin in general has made me so much more productive in actually making animations rather than spending a month fiddling complicated program UI!!

All the colors used in the output gif are modified by quantizing them into a smaller subset of colors (256 for the algorithm I'm using). This means any color close to black may be assigned to be black in the output gif. Thus, if you check "use black as transparent", those colors would then be made transparent. If the transparent color was changeable,  it would still be subject to the above issue as the algorithm controls which colors are combined, but I can put it on my list of things to look into. If you limit yourself to 256 colors (including black), I don't think the algorithm will modify them, but I'm not 100% sure. The max output gif frame size of 1000x1000 is new to me and must be another constraint of the library I'm using to make it all work.

I have a suggestion. Maybe a zoom out will be good because I tried to edit my scenarios and couldn't view them entirely due to their size.

I have an idea. Is it possble to make an animation grid? like an overlay that shows exactly where each frame is located. For example, if I'm making an animation of 16x32 sprites, I'd expect to see tiled 16x32 squares so I know exactly where to draw at a glance. I love how it's come so far however!

Hello, ActuallyASign!
The plugin take only the selected layer to make the animation. So, you can make another layer with your grid! In paint.net forum nicos62 made another plugin to help us to make grid. Here's the link:

This sentence is helpful as it gives me detail regarding the problem you are having and tells me where to look. I have duplicated the crash and am now looking into it.

Now it's perfect!
Your plugin is simply wonderful! Thank you!

I’m using the newest version of PDN from the website (4.3.10) and it doesn’t work. It also crashes the entire program when I close the plugin.

I have my image in layers, in frames with no layers, as individual images, it doesn’t work.

I've been developing a game for years and this plugin helped and still is helping me a lot. Thank you, keep up the good work :)

kind of disappointing honestly. the program itself is fine, but the interface is messed up on my laptop. i tried the fix listed in the comments with changing the dpi settings but it just makes the rest of the program messed up in different ways :/

okay so i'm not sure if this is the fault of this plugin or the dpi settings i messed with but even after trying to uninstall it and revert my settings it was still broken. i uninstalled and reinstalled pdn and now even that wont work because it hits a fatal error in the installation process that i dont know how to fix. moral of the story: if you need to mess with your computer settings to get this plugin to work, don't.

This is a great tool! thanks for making it!
I just wish that you could edit the sprites while the animation window is open, so you could see the change as you make it.

Hi. Excellent tool. Just to let you know, on HIGH DPI monitors with increased font scale, the interface is hard to read. I have fonts increased by 140% on 4K monitor and this is what I see. 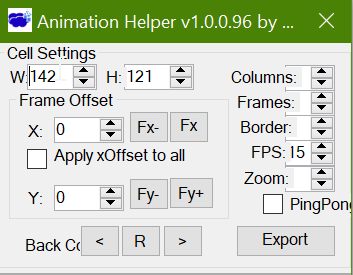 I was able to resolve this by changing the compatibility properties high DPI settings for the paint.net executable.

Perfect @populous. I was able to configure it, even I've tested the "system (enhanced)" option and work better. Thanks for the tip, never realize about that PPP option in compatibility tab.

Does this work for the Microsoft Store version?

i use it for my sprite sheets

is there a way to make a transparent background?

This is a must have, please may it be added

This plugin is a crucial part of my current workflow. Thanks for making it!

I've rely on this plug in with a lot of my work on my project, It's simple to pick up, and it's something any pixelartist using Paint.net should use!

How does this work?

when you added it to paint.net (like the INSTALL.txt file said) you can open it and go to effects >  Animation helper

I cannot get the "animation" option to show up

THANK YOUUU. I am continuing an abandoned open source game, and this is useful as HECK!

I'm glad you have found it useful.

I usually use more than one layer, but i noticed that this plugin doesn't select all the image, but only a layer. Is there a method to make that work with all the layers?

Currently, Paint .NET only allows plugins to access the image data for the currently-selected layer so unfortunately no.

Easiest method I can suggest is to Flatten (CTRL + F) and then Undo (CTRL+Z) once you're done with the plugin.

MAKE SURE YOU DON'T ACCIDENTALLY SAVE AND CLOSE WHILE FLATTENED OR YOU'LL LOSE YOUR LAYERS!

Nice plugin! Would be great for Krita software

Whenever I use the plugin to animate a sprite the Animation Helper window opens very small. When I resize the window to be bigger, all the text/buttons in the window remain smooshed in a tiny section of the window and are basically unusable. Any ideas on how I can fix this. I'm running the newest version of windows 10. Any help would be great! Thanks 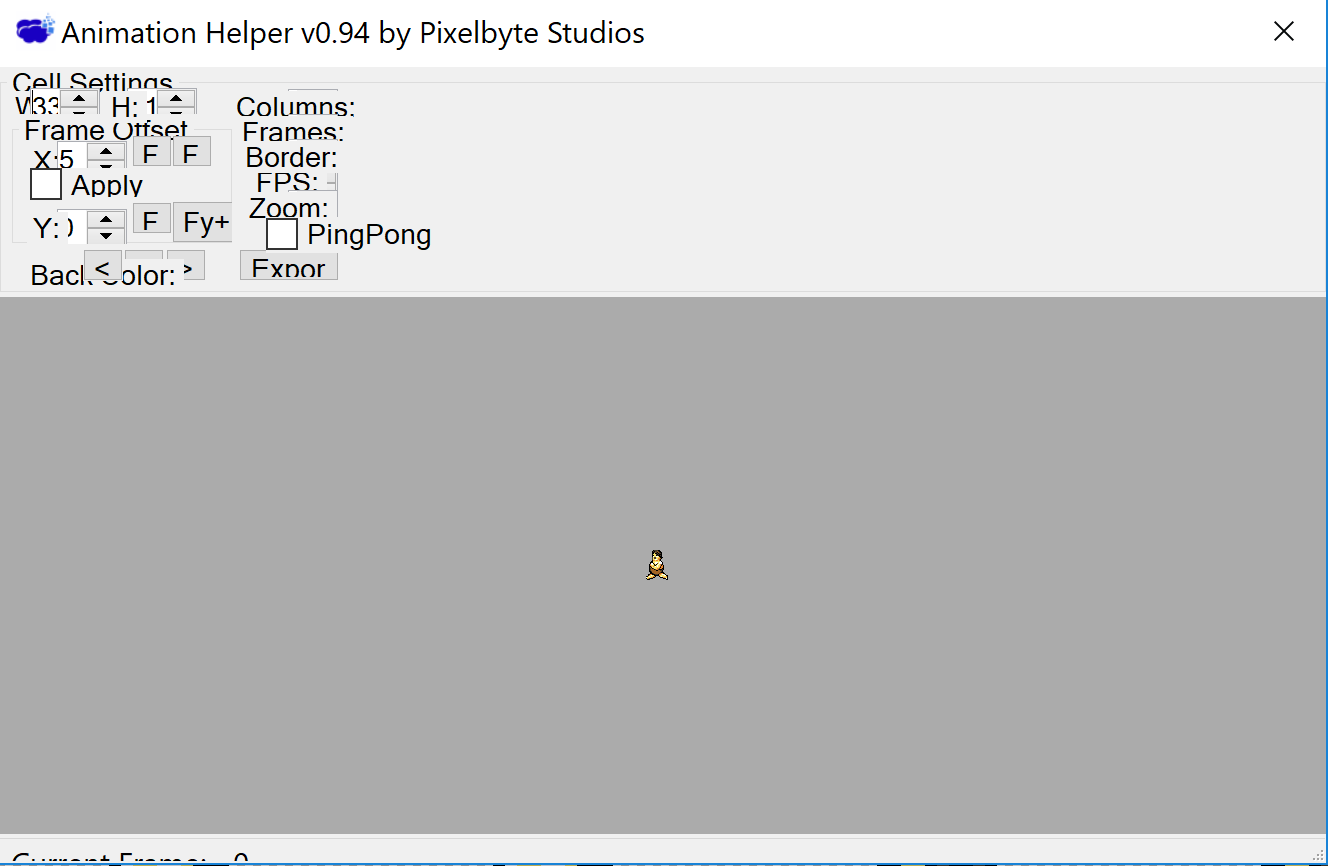 I just uploaded a newer version of the plugin. you might download it and see if it helps with your issue. Also make sure you are using the latest version of Paint .NET.

Thank you I'll go ahead and try that!

I'm having exactly the same problem. I'm already using latest versions of Paint.NET, Windows 10 and this plugin with scaling of 200%. It's a HiDPI display

Just downloaded it, and I have the same problem. I have a 4K screen, and the DPI are 250%

Amazing tool! You got a shoutout from ConcernedApe (stardew valley dev) who used your tool in his game, which is how I found it. So simple but so useful.

Thanks for the positive feedback.  I knew he used Paint .NET for Stardew Valley but didn't know about my plugin. Very cool!

I have an image that is 600 pixels wide. I want to make 300 frames which are 300 pixels wide - incrementing one pixel each time. Is this possible with this plugin?

This tool is a MUST have for anyone working with sprites in Paint.Net. Preview can be fine tuned for your specific spritesheet layout, including borders and offsets. Superb!

I'm glad you find it useful, and thanks for taking the time to comment!

This looks awesome, I wish there was a version for macs though

This is REALLY cool plugin.

I don't need this, but thanks! 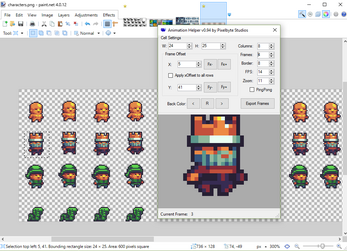 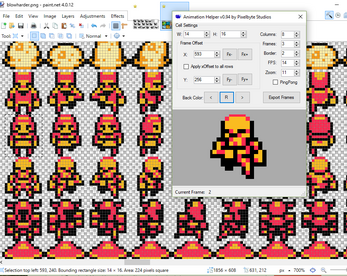 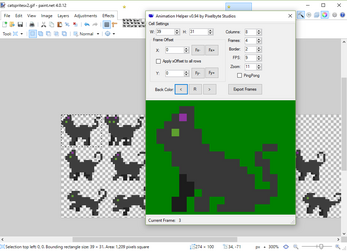